Health insurers are getting crushed 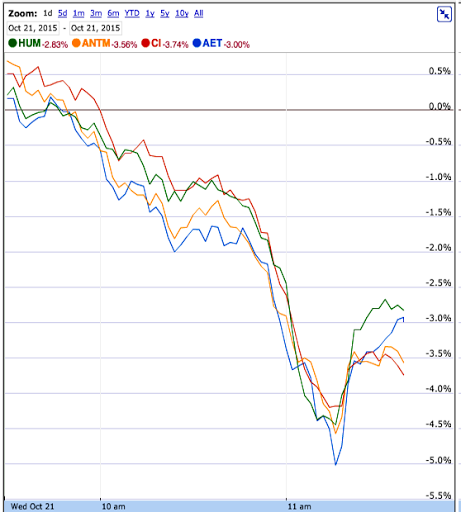 Stocks of health-insurance companies are getting slammed.

In late-morning trading on Wednesday, Anthem, Humana, Cigna, and Aetna were all down by about 3%.

Earlier, democratic presidential frontrunner Hillary Clinton said the mergers between Anthem and Cigna, and Aetna and Humana, should be closely scrutinized. The $37 billion-deal between the latter two got shareholder approval this week.

According to Bloomberg, Clinton said she would "vigorously enforce antitrust laws" to ensure the mergers were not detrimental to consumers.

"As we see more consolidation in health care, among both providers and insurers, I'm worried that the balance of power is moving too far away from consumers," Clinton said in a statement, according to Reuters.

Last month, biotech stocks got slammed after Clinton tweeted that she would take on "price gouging" in the pharmaceutical industry. That was after the price of daraprim, the parasitic-infection drug, was hiked 5000% by Turing Pharmaceuticals.

The broader stock market was little changed late Wednesday morning, with the Nasdaq nearly flat, and its biotechnology ETF down about 1%.

Separately, shares of Valeant Pharmaceuticals cratered by as much as 30% after Citron Research described the company as a "Pharmaceutical Enron".

Here are shares of the four health insurers proceeding with mergers.
Was this article helpful? Yes -0 No -0208 Posted by: 👨 James C. Mooney